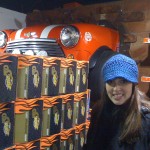 A mini is crashing through the wall! So, I posed in front of it. Just before this photo, David and I were chatting with one of the “magicians” in the London Hamley’s toy store who was demonstrating a magical glowing finger. He heard my accent and asked if I was from the US. I replied, “yes” and he announced, “so you’re a septic!” And I agreed. He asked, “you know what they call anti-Americans?” … “Listerine!”

Allow me to translate:

“Septic Tank” is shortened to “Septic”

Leading projects and organisations as a social entrepreneur, consultant and producer for design, innovation and creative organisations with my core values - community, sustainability, equality. Contact me at michelle@michelledrouse.com, +1 949 510 2742or Skype mdrouse5.